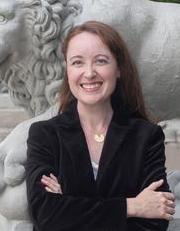 I am currently a Ph.D. student studying intersections of religion (Protestantism and Judaism) and the body in the British Atlantic with Dr. Erika Gasser. This year (2022-2023) I am being funded by the Dean's Dissertation Completion Fellowship. My research encompasses themes of gender, disability, medicine, death, burial and personal religious practice.

I previously received a master's degree from the University of Cincinnati (2017). My thesis, “With a Mother’s Hand: A Study of First World War Chaplains, Religion and Gender Identity,” was awarded first place for the 2017 Zane Miller Award for original graduate research and writing. I also defended my thesis with distinction. In 2004, I graduated with a B.A. in history from Mount Vernon Nazarene University. I have also taken courses in German language at Columbus State, and the Reformation at The Ohio State University.

As a graduate assistant, I have had the pleasure of serving as a teaching assistant in the courses Nazi Germany and the Holocaust, The History of Show Business, Themes in World History: Immigration, Drugs in the Americas, Human Rights and Security, and U.S. Survey I.

I have been the grateful recipient of several academic awards. Not only did I receive the Zane Miller Prize for my master’s thesis, but I placed first the next year as well for my paper entitled “Hearing the Gospel in a Silent Word: Disability, Gender and Religion in the Massachusetts Bay Colony, 1630-1684.” In 2018, the Department of History awarded me the Niehoff Fellowship, which granted me a no service year as well as providing funding for my research.

I have presented this research at several conferences, including the above papers at the Queen City Colloquium (University of Cincinnati graduate student conference) in 2017 and 2018, respectively. I also delivered a version of “Hearing the Gospel in a Silent World” at Calvin College in 2018 at the Faith and History Conference and at the Dublin Seminar for New England Folklife “Living with Disabilities, 1600-1900.” in June of 2021. In 2019 I presented my paper, “Not Cutting Covenant: Circumcision, Rhetoric and Nonconformity in the Early Modern Atlantic” at QCC. I have also been a guest lecturer in the Department of Sociology, presenting on religion and gender, and an invited panelist at the Midwest American Academy of Religion Conveference (2021).

As a member of the Department of History, I have had several opportunities to participate in university service. During the 2017-2018 academic year, I was treasurer for the History Graduate Student Association and helped plan and execute the Queen City Colloquium. The following year I helped spearhead a new, interdisciplinary course entitled Public Fellowship for the Humanities. During the 2018-2019 academic year, I was the graduate student representative to the faculty, and in that capacity assisted in reviewing our curriculum and helped propose reforms. In that year as well, I was invited to serve on the committee conducting the headship search for t