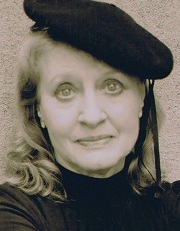 Elaine Eckstein is a native of Cincinnati with extensive experience in the performing arts and education. She has danced with the Cincinnati Ballet, the Radio City Music Hall Corps de Ballet, toured for Walt Disney Productions and performed and choreographed for theaters across the mid-west. Performing credits include Fiddler on the Roof, The Addams Family, White Christmas, Annie, Sleeping Beauty and The Wizard of Oz at La Comedia at Dinner Theatre in Springboro, Ohio; Nunsense for Jersey Productions at the Aronoff Center; Nunsensations, Cinderella and A Christmas Carol at the Covedale Center for the Performing Arts; and Arsenic and Old Lace, Show Boat and The Music Man on the Showboat Majestic. For five seasons she worked at the Landmark Children’s Theatre in Centerville, Ohio as a performer/instructor/choreographer teaching and appearing in such roles as Mrs. Potts in Beauty and the Beast, The Old Woman Who Lived in a Shoe in Babes in Toyland and Miss Amelia in The Little Princess, among others.

She choreographed the ballet Showboat Suite for Tall Stacks ’99, five productions of Carolfest for the May Festival Chorus and “Boogie-Woogie Bugle Boy” featuring Doc Severinsen for the Cincinnati Pops PBS special, Big Band New Year’s Eve. She has choreographed for the Louisville Orchestra, Miami University, Covedale Center for the Performing Arts, Kincaid Regional Theatre, the School for Creative and Performing Arts and Landmark Children’s Theatre. She has taught dance at the University of Louisville, the College of Mt. St. Joseph-on-the-Ohio and for over 30 years for Cincinnati Public Schools and the University of Cincinnati College-Conservatory of Music. She served on the Ohio Department of Education Standards Writing Team for the Arts that created the first Ohio Academic Content Standards in the Fine Arts and on the committee that revised them in 2011. She served years on the boards of Contemporary Dance Theater, the Forget-Me-Not Historical Dance Company, Cincinnati Playwrights Initiative and the Pi Alpha Mu Chapter of Phi Beta Fraternity for the Creative and Performing Arts. Along with two other teachers at the School for Creative and Performing Arts, she was awarded the 2004 Ohio Academy of History Public History Award for the Ohio Bicentennial project, Cincinnati: a Work of Art. She is listed in Who’s Who among America’s Teachers. She is a graduate of the Dance Division of the College-Conservatory of Music with a Master of Fine Arts degree in dance and holds state of Ohio teaching certificates in dance and special education.