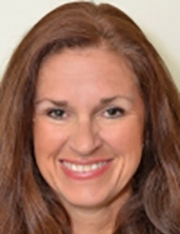 Lisa Ericksen studied Vocal Performance at the College-Conservatory of Music for both her bachelor’s degree and doctoral work. She received her M.M. from Miami University. In addition to her degree work, Lisa has earned her level two certification in Contemporary Commercial Vocal Pedagogy from Shenandoah Conservatory and took part in a training seminar, Care of the Professional Voice at the University of Michigan. Lisa is currently an Adjunct Professor of Voice at Miami University, a Lecturer at the University of Cincinnati College-Conservatory of Music and an Instructor at Wright State University in the Department of Theatre, Dance and Motion Pictures.  In July 2018, Lisa had the honor of joining four of her colleagues from CCM to teach musical theatre in Beijing, China.
Lisa began her career as a classical singer who performed extensively in the United States and Europe. She has performed leading operatic and concert roles with Baltimore Opera, Orchestra of St. Luke’s, Virginia Opera, Tel Aviv Symphony Orchestra, Concert Opera of Philadelphia, Cincinnati Baroque, Whitewater/Sorg Operas, Handel Society of Baltimore, the National Bulgarian Radio Orchestra, Piccola LaScala Opera, Toledo Symphony Orchestra, Sanibel Island Music Festival, Pennsylvania Ballet and concerts at Lincoln Center. She has performed in touring productions of Rigoletto (Gilda), Don Giovanni(Zerlina) and The Magic Flute (Pamina, The Queen of the Night) in France, Germany, Spain and Portugal. She was the soprano soloist in productions of Carmina Burana, Mozart’s Requiem and Chopin’s Lady of the Camelias with the Cincinnati Ballet at the Aronoff Center.
She is a winner of the Liederkranz Foundation Awards and the Licia Albanese/Puccini Foundations Awards in New York. She also was the second place winner in the Baltimore Opera/Vocal Competition.
As a crossover artist, she has performed the role of Carlotta in Bell/Tchaikovsky’s Phantom of the Opera and in productions of Lady in the Dark and Sweet Adeline for City Centers Encores! in New York City. Lisa continues to perform regionally and locally.  She was a principal performer in an internet commercial for Downy fabric softener.
Lisa’s current or former voice students have performed on Broadway: & Juliet (OBC), Cabaret (Revival), Hamilton, Rent, Paradise Square (OBC), Some Like It Hot (OBC), Spamalot, Les Miserables, Titanic, A New Brain; Off Broadway; National Tours:  Beautiful, Book of Mormon, Cats, Charlie and the Chocolate Factory, A Chorus Line, Dreamgirls, Hamilton, Joseph and the Amazing Technicolor Dreamcoat, Kinky Boots; U.S., Asian and Australian tours, Mamma Mia, Mary Poppins, Million Dollar Quartet, Once on This Island, Something's Rotten, Summer: The Donna Summer Musical, The Wedding Singer, The Wizard of Oz and Shrek, Disney, Regional theatre (Equity), numerous cruise lines, non-Equity tours and summer stock companies throughout the country.  Film: Tick, Tick...Boom! (dir by Lin-Manuel Miranda).  Two of her private students have been on the Billboard Top 100 Rock and Pop charts.