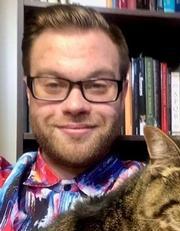 Andrew R. Lund ("Andy," he/him) is the recipient of the 2023 Arthur Ross Rome Prize at the American Academy in Rome. Previously, he was the Resident Instructor for the Intercollegiate Center for Classical Studies in Rome ("the Centro") for the 2021-2022 academic year, and he was the Classical Languages and Cultural Program Coordinator for the Department of Classics at Colorado College.

He is a Ph.D. candidate in Classics (Greek and Latin Philology) who received his B.A. ('13, Classical Languages and Classical Tradition) from Grand Valley State University, and his M.A. ('18, Classical Philology) from the University of Cincinnati. His dissertation, "Seneca Comicus: Comic Enrichment and the Reception of the seruus callidus in Senecan Tragedy" investigates how Seneca's tragedies engage with Roman comedy through the stock figure of the seruus callidus (the so-called "clever slave"). His research and teaching interests include: Greek and Roman drama; Greek and Latin poetry; reception studies; women's, gender, and sexuality studies; and the interactions between literary and material cultures.

Imagining the Edge: Peripheral Spaces and Marginal Voices in the Ancient World

(10-2022. ) Seneca Comicus: Comic Enrichment and Seneca's Phaedra .Center for Classical Studies of the School of Arts and Humanities of the University of Lisbon, Portugal. Level:International

-04-2010 Manson A. Stewart Scholarship Classical Association of the Middle West and South (CAMWS)