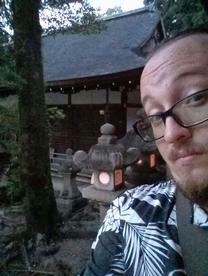 My main areas of interest are Non-Western Comparative Philosophy, Embodied Cognitive Science, and the possibility of interactions between the two. Specifically, I focus on Indian and Japanese Buddhist Philosophy and explore ways to use each in contemporary problems within Ecological Psychology, cognitive science, and environmental ethics. I am currently researching a comparative project involving empathy and a Buddhist notion of practice.

The University of Tokyo Center for Philosophy