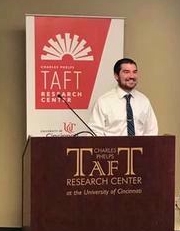 I am a PhD student studying Confederate nationalism and Southern identity in the press during the Civil War under Dr. Christopher Phillips. My research focuses on the ways the Southern press helped to create and either sustain or subvert nationalism during the war. While many scholars rely on papers from the large cities in the east, my work looks to examine smaller local papers that were interested in writing for a very local audience about their specific exeperience of the war. I have presented work on the press at the University of Alabama, Louisiana State University, and here at the University of Cincinnati.I graduated from The University of Alabama with my BA in history in 2016 and an MA in history in 2018.

Bachelor of Arts: The University of Alabama Tuscaloosa, AL, 2016 (History)

Master of Arts: The University of Alabama Tuscaloosa, AL, 2018 (History)

My research examines the ways the Southern press created and either sustained or undermined Confederate nationalism during the Civil War. Newspapers were the driving force of political knowledge during the war, and as such, they helped to define what it meant to be Southern and what it meant to be Confederate. As the war progressed and differnent areas experienced a very different type of war, aspects of regional identity, political ideology, and interactions with both the Confederate and Federal governments forced editors and their readers to consider their support for the war and their identity as Confederate citizens. Outside of cities like Richmond and Charleston, this was negotiated by local papers who worked to either soldifiy nationalism or chip away at its foundations in order to promote what they believed was best for the South. My research seeks to analyze how they accomplished this.

Kevin McPartland (09-2017. ) ‘“In No Sense of the Word Were They Beaten’ Interpretations of the Battle of Gettysburg in the Press” .The University of Alabama. Other Institution. Level:University