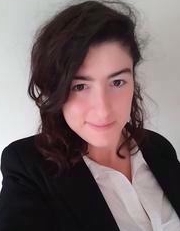 Eirini Paizi is a second year graduate student in Classics with specialization Classical Archaeology. She has received her B.A. in Classical Archaeology and Ancient History 2016 at the Ruprecht-Karls Universität Heidelberg. Her BA. thesis treated the Greek and Near Eastern time reckoning systems and astronomical periods calculated by the Mechanism of Antikythera. Since January 2018 she is preparing an MA thesis with the title: “Patterns of Imports and Overseas Connections in Knossos of the Archaic and Classical Periods: A Reassessment”.  She has participated in various excavations and other field projects in Germany (Eisenberg) and Greece (Azoria, Anavlochos, Tenea, Olympia) at sites from the Early Iron Age to the Late Roman periods. Her main interests are the archaeology and material culture of the Early Iron Age, the socio-economic exchange networks developed in the ancient Mediterranean, the emergence of state societies and Greek pottery, sculpture and coinage.