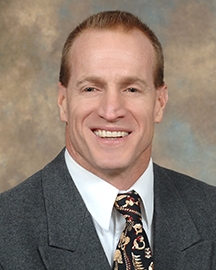 Dr. Thomas Palmer, PhD is an Associate Professor in RENS. He joined our faculty in 2016 when Athletic Training moved to CAHS. He had previously earned his PhD in Rehabilitation Science at the University of Kentucky in 2012 and has since been at UC in CECH. His research focuses on physical performance outcomes as they relate to movement analysis of the pelvis, spine and trunk during sport and daily acts of living. His work with both sport and industrial athletes, firefighters, and the military has been published in the Journal of Athletic Training and the Journal of Strength and Conditioning Research as well as several other journals.  Over the past several years, he has evaluated performance metrics such as heart rate variability and VO2 max in numerous athletes including scholarship and non-scholarship UC athletes over time. Using measures taken early in athletes’ careers, along with biomechanical field assessments, he has begun to predict performance success and attrition over time. Over the summer, he learned some his project entitled “Sport Science Division I Women's Wellness Initiative” was funded by the American Athletic Conference. Importantly, in 10-20 years, Dr. Palmer would like to be known for establishing safe and population appropriate training progressions and programming. Currently, he believes this area of research is very convoluted and filled with infomercial information. He hopes to debunk this information with high-quality, evidence based research.

·    Immediate Didactic Reinforcement within the Clinical Setting: The Effects on Cognitive and Psychomotor Learning. July 2003 - 2005.

·    FMS testing with and with out video instruction in a college population.

·    Dietary Inquiry : A Nutritional Survey for the General Population.

·    The Effects of Galvanic Electrical Stimulation on Hamstring Strength and Sprint Speed.

·    The Effects of Creatine Phosphate on a Six Week Spring Program for Collegiate Division I Soccer Players.

Palmer, TG. (2017. )Inter-day Session Reliability of a Novel Assessment of Rotational Power of the Pelvis, Spine and Trunk.Journal of Spine Care, ,