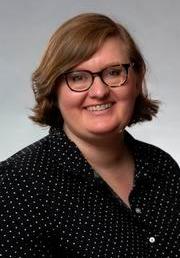 Katherine earned her Bachelor of Arts in Spanish and German from Northern Kentucky University in December 2011. After completing her Master's at UC in Spring 2014, she accepted a scholarship from the Verband der Deutsch-Amerikanischen Clubs, e.V. (VDAC) and studied at the Universität Bielefeld under Prof. Dr. Walter Erhart. She returned to UC in Fall 2015 as a Ph.D. student, achieving candidacy in April 2016. She received a Charles Phelps Taft Research Center Dissertation Fellowship for the year of 2017-18 and was awarded a Fulbright Graduate Research Fellowship for 2018-2019, where she researched in Berlin at the Bertolt-Brecht-Archiv. Her dissertation project examines Robert Wilson's Faust I+II and the Faust legend.

Her academic interests include German literature and drama since the 16th century, Theatre Studies, German-American Studies, Spanish Language and Cultural Studies, Music History and Theory, and Film and Media Studies.