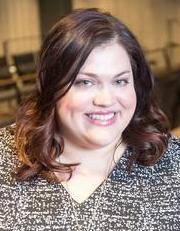 Jeanna  Vella is currently Director of Marketing and Data Analytics at Cincinnati Shakespeare Company where she recently introduced the public to the brand-new $17.5 million Otto M. Budig Theater in Cincinnati, OH!  Under her leadership, the theater's single-ticket and subscription sales have more than tripled in addition to the vast expansion of Education and Outreach programs across three states.  Jeanna also leads the Data and Impact Strategy at Cincinnati Shakespeare and recently authored a study measuring, among many things, empathy improvements in students who study “Romeo and Juliet”, presenting her findings at the 2018 Shakespeare Theater Association Conference.

An arts administration professional, Jeanna has worked with several arts organizations in New York, NY including the Marilyn Horne Foundation, NYU’s Skirball Center for the Performing Arts, and The Araca Group as well as in Louisville, KY at Kentucky Shakespeare before starting at Cincinnati Shakespeare in 2010.

In 2015, Jeanna was selected as a member of the Cincinnati USA Regional Chamber’s prestigious C-Change Class #10. In 2016, she was nominated for the Cincinnati Business Courier’s 40 Under 40 Awards.  In 2018, Jeanna was awarded a WCPO’s Next Nine Award recognizing rising stars in Cincinnati.  She is also currently an adjunct faculty member at Miami University’s College of Creative Arts teaching courses in Arts Management.  She holds an M.A. in Performing Arts Administration from New York University and a B.M. in Music Education from Miami University. In her spare time, she is a clarinetist in the Southwestern Ohio Symphonic Band.