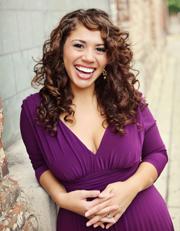 Keyona Willis blends her multifaceted interests in performing and utilizes those skills to pour into her passion of teaching. She has performed in opera houses, regional theatres, musical theatre workshops, cover bands, jazz combos, recitals and orchestral concerts. Willis' interest in singing a variety of genres led her to explore different elements of vocal studies from the lens of functional voice training. She has certifications in Somatic Voicework™ , the LoVetri Method Levels I, II, and III, Estill Voice Training Levels I and II, Soul Ingredients® Methodology, and a Singing Health Specialization. Her crossover work led her towards her doctoral research, “The Crossover Opera Singer: Bridging the Gap Between Opera and Musical Theatre.”

Willis recognizes that performance culture is expanding, allowing for both more variety and for more demands on the voice. She sees the value in creating healthy singing practices that are essential to cultivating a sustainable singing career when navigating different genres of music. She utilizes her diverse training background to work with a variety of students including beginners, pre-professionals and professionals to create a holistic training experience catered to each student. Her singing health specialization has aided in her ability to work with singers and professional voice users after they are released from voice therapy. Willis has current and former students working on Broadway, in TV/Film, on international stages, on cruise ships, on national tours, in regional theatres and in touring bands. She also takes great pride in working with younger singers and collegiate students.

As a performer, despite the cancellations caused by the COVID-19 pandemic, Willis was seen this spring in a COVID safe production performing Mimi in La Bohème with Opera Columbus. The performance was directed by Dennis Whitehead Darling and conducted by Kathleen Kelly, who also created the new libretto. This fall, Willis will perform a rescheduled concert of Mass in Blue with Capriccio Columbus. In 2022, she will perform with Central Ohio Symphony Orchestra singing the role of Violetta in La Traviata. Prior to the COVID-19 cancellations, Willis had the honor of performing Lauretta in Gianni Schicchi with Opera Columbus and Mother in Amahl and the Night Visitors at St. John’s Church. Earlier that spring, Willis was the soprano soloist in Verdi’s Requiem with Central Ohio Symphony Orchestra and Beethoven’s Ninth Symphony with the Springfield Symphony Orchestra. Willis also performed as the soprano soloist in Mozart’s Requiem with Capriccio Columbus and later with the Westerville Symphony Orchestra. Willis was seen in New York portraying Alice Ford in Verdi’s Falstaff with Prelude to Performance. She also had the honor of singing a premier work, The Ruby Elzy Story, inspired by David Weaver’s book, Black Diva of the Thirties. Other notable performances include Donna Anna (Don Giovanni), Vitellia (La Clemenza di Tito), Aida (Elton John and Tim Rice’s Aida), Adolfo (Faramondo), Juliette (Romeo et Juliette), Countess (Le nozze di Figaro), Polly (The Threepenny Opera), Susannah (Tintypes), Monica (The Medium) and Rosa Bud (The Mystery of Edwin Drood). She also enjoys giving recitals, master classes and workshops.