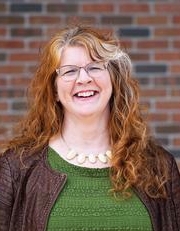 Kim Jacobs-Beck is Professor of English at UC Clermont. She joined the college in 2001 and has served as Chair of the English, Languages, and Fine Arts Department (2010-2014) and as Interim Associate Dean (2014-2017). Dr. Jacobs-Beck teaches both literature and composition courses. She holds an MFA in Creative Writing - Poetry and a PhD in eighteenth- and nineteenth-century British literature, both from MIami University.

(2014. ) “Pageant and Parade: Imperialist and Populist Performance in Percy Shelley’s Mask of Anarchy and Swellfoot the Tyrant” .Interdisciplinary Humanities , , (Summer 2014 ) ,

“Dissenting Homiletics in Mary Wollstonecraft’s A Vindication of the Rights of Woman” .Interdisciplinary Humanities, , (Summer 2012, ) ,