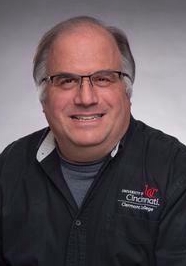 Professor Krome received his Ph.D. from the University of Cincinnati in 1992. He taught at Northern Kentucky University prior to joining the staff at the Jacob Rader Marcus Center of the American Jewish Archives in 1998. He also taught classes for the Judaic Studies Program and the A & S History department.  In 2007 he joined the faculty at the University of Clermont College, where he is now a Professor of History.

History of the Jews of Cincinnati (With John Fine)

Film and the History of World War II

Studies in the Holocaust