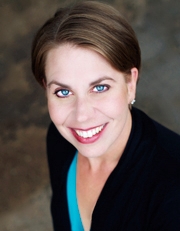 Celebrated for her strong lyric voice, sizzling coloratura facility and engagingly sincere personality, Mezzo-Soprano Quinn Patrick Ankrum has performed a wide variety of repertoire spanning the centuries from Claudio Monteverdi to John Harbison. She has sung with opera companies and orchestras throughout the United States, as well as with the National Orchestra of Mexico in Mexico City.

In the 2014-15 and 2015-16 seasons she demonstrated her versatility as she collaborated on the operatic, recital and concert stages with musicians in Missouri, Texas, New York, Florida and Kansas, along with international engagements in Toulouse, Paris, Mondavio (Italy) and Oban (Scotland). She will return to the U.K. this May where she will appear in a recital featuring the music of American composers at East of England Organ Day at the Royal Hospital School, Holbrook, as well as in a concert featuring the music of Rameau with the East Anglian Academy.

Ankrum is an advocate of contemporary composers. She recently premiered Romanian composer Vlad Burlea’s chamber piece “Oglinda” (Texas and Kansas 2016) and created the role of the Mother in the world premiere of J. Todd Frazier’s opera Breath of Life (Lubbock, Texas, 2015).  In addition, she co-premiered John Harbison’s chamber work Crossroads with colleagues at Texas Tech University (2013). She is the co-creator of Living Song Project with pianist and University of Oklahoma faculty member Elizabeth Avery, DMA. This unique database project promotes the art song and vocal chamber music of living American composers.

In addition to being an active performer and teacher, Ankrum takes an interest in musicians’ health and wellness. She is an Andover Educator trainee, and will be licensed to teach the course What Every Musician Needs to Know About the Body when she finishes her training.

Ankrum received degrees from Trinity University in San Antonio (BM, MAT), the University of Colorado at Boulder (MM) and the University of Rochester, Eastman School of Music (DMA), where she studied with Robert McIver. She was a Young Artist in the Glimmerglass Opera Young American Artists Program and the Baltimore Opera Studio, and participated in the National Association of Teachers of Singing Intern Program.

She has been a finalist and winner in numerous regional and national competitions, including the Metropolitan Opera National Council auditions (Rocky Mountain Region) and the National Association of Teachers of Singing Artist Awards competition (2nd place winner, 2006). She has served on the faculties of the State University of New York at Fredonia, Nazareth College (Rochester, New York) and Texas Tech University (Lubbock).