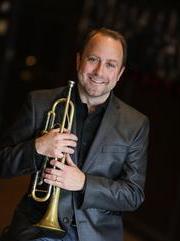 Scott Belck currently serves as the Director of Jazz Studies and Professor of Music at the University of Cincinnati’s College-Conservatory of Music (CCM) where he directs the CCM Jazz Orchestra and teaches applied Jazz Trumpet.

He is a founding member of critically acclaimed Tromba Mundi contemporary trumpet ensemble and has toured as a member of Grammy Award winning funk legend Bootsy Collins’ Funk Unity Band as lead trumpet. He has served as trumpet and cornet soloist with the Air Force Band of Flight in Dayton, Ohio where he also held the post of musical director for the Air Force Night Flight Jazz Ensemble.

He is the Founding the Artistic Director Emeritus of the Cincinnati Contemporary Jazz Orchestra. On Monday nights in Cincinnati, he serves as lead trumpet and musical director for the Flying Circus Big Band.

His playing credits include recordings lead trumpet/guest soloist with the Cincinnati Pops featuring the Manhattan Transfer and John Pizzarelli, the Glenn Miller Orchestra, the Van Dells, and jazz soloist with the University of North Texas One O’clock Lab Band with whom he recorded four CDs as jazz soloist and section trumpet.
He has performed as principal/lead trumpet with the St. Louis Symphony, Indianapolis Symphony, Cincinnati Symphony, the National Symphony Orchestra of the Dominican Republic, the Dayton Philharmonic Orchestra, the Lexington Philharmonic, the Richmond Symphony Orchestra, and as section trumpet with the Duluth-Superior Symphony Orchestra and the Duluth Festival Opera.

He has also served as the Artistic Director of the Dayton Jazz Orchestra, the Jazz Central Big Band, and the Miami Valley Jazz Camp in Ohio.