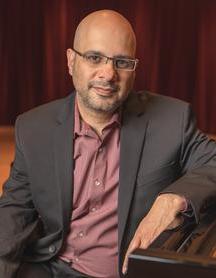 Winner of top prizes at the M.K Čiurlionis International Piano Competition, the Cleveland International Piano among others, Israeli-American pianist Dror Biran has been described by The Cleveland Plain Dealer as “his fortissimos crashed and roared, but next to them came pianissimos that whispered seductively…he has technique to burn and uses it effectively.” Biran’s superb tonal control combined with interesting phrasing and voicing has won him consistent critical acclaim and enthusiastic audiences.

As an avid chamber musician, Biran has appeared on a regular basis with different music ensembles such as Carmel, Amernet and Aviv String Quartets.  He premiered works by Grawemyer and Rome Award winners such as York Höler and Sebastian Currier. His concerts have been broadcasted by WUOL, WCLV, WQXR, The Voice of Music – Israel and Classic FM South Africa, among others. Biran can be heard on the JMC (Jerusalem Music Centre) and Centaur labels

A recipient of multiple scholarships from the America-Israel Cultural Foundation for distinguished musicians, Biran began his piano studies with Ms. Lily Dorfman, and mentored by Arie Vardi, Paul Schenly, Daniel Shapiro and Lee Luvisi. He graduated from Rubin Academy of Music at Tel-Aviv University and the Cleveland Institute of Music where he received his doctorate degree in piano performance.

Biran taught at the University of Louisville, Youngstown State University and Case Western Reserve University. Currently, he serves as Professor of Piano at the College-Conservatory of Music University of Cincinnati.