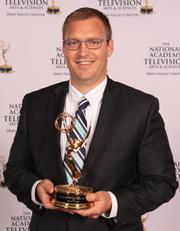 Joe Brackman is a nine-time Emmy Award-winning producer and director. He joins CCM Media Production from WBNS-TV in Columbus, Ohio, where he produced the award-winning coach’s show for Ohio State University football – “GameTime with Urban Meyer” and “GameTime with Ryan Day” – along with the program “Inside Ohio State Athletics” for WBNS and the FoxSports Ohio network. An award-winning producer and director, Brackman has also served as the General Manager for AggieVision at New Mexico State University, where he recruited, trained and mentored students in the production of live NMSU sports telecasts for regional sports networks for FoxSports Arizona and ESPN3. Brackman has both an undergraduate degree in Communication and a Master of Business Administration degree from Ohio University.