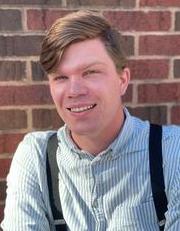 Stephen Bryant is a first year Ph.D. student in the Department of Political Science at the University of Cincinnati. His subfields are International Relations and Comparative Politics. He is also pursuing a doctoral concentration in Feminist Comparative International Politics.

Stephen has a Bachelor's Degree in Religious Development and published his honors research on religious change and its impacts on Cherokee culture. He also has a Master’s degree in International Relations with a concentration in International Development. His masters research focused on the effectiveness of Exectuive Orders 13769 and 13780 and the international impacts of these travel bans. He has experience working on peace development projects through The Center for Research and Action towards Sustianable Peace Development in Huye, Rwanda. Stephen has also worked within the justice system overseeing cases involving drug related offenses. This work has informed his current involvment in research relating to racial disparities in death penalty sentencing in Texas.

Stephen’s research interests include transnational feminism, religious and political nationalism, politics of memory, and nuances in Islamic thought in the Middle East.