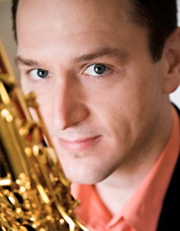 A native of Colorado, Dr. James Bunte has earned degrees from the University of Colorado at Boulder (BM, BME), and CCM (MM, DMA). As a concert saxophonist, James Bunte is an active recitalist, giving recitals and master classes throughout the United States and most recently France, and Japan. He had his Carnegie Hall debut in 2006 and has performed at NASA (North American Saxophone Alliance) regional and national conferences as well as the World Saxophone Congress (2009 in Thailand and 2012 in Scotland) and Taiwan.

Bunte is the regular saxophonist with the Cincinnati Symphony Orchestra and has recorded eight compact discs with the CSO and Cincinnati Pops. He has performed with the Lyrique en Mer Orchestra (France), Louisville Philharmonic, Dayton Philharmonic, Eugene Symphony, Charleston Symphony, Richmond Symphony (IN), Kentucky Symphony, Springfield Symphony (OH) and the Colorado Music Festival Orchestra. Recent CD releases include the premier CD from Oasis Quartet (in which he mainly plays alto) on the Innova label.

Prior to his appointment at CCM, Bunte was on the faculty at the University of Oregon, Miami University (OH) and Northern Kentucky University. He also has public school experience, serving as an assistant high school band director in Kentucky. James Bunte is a Yamaha and Vandoren Artist.