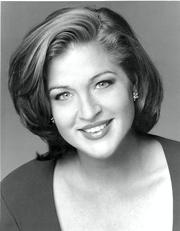 Gwendolyn M. Coleman (formerly Coleman Detwiler), soprano, is a teacher and artist of international reputation. Praised by music critics for possessing a voice of “divine beauty” with “sparkling coloratura” and “impressive high-flying top notes”, she has been featured in solo concert work with major American orchestras such as those in New York, San Francisco, San Antonio, Cincinnati, Denver, Portland and Buffalo among others. She made her European debut as the soprano soloist for the Klassiche Musikfest in Austria. Dr. Coleman has presented solo recital and chamber music at the Château de Vianden in Luxembourg and across the United States in New York, Atlanta, Chicago and Seattle, as well as at prominent festivals such as the Summerfest Chamber Festival in Kansas City, the Chautauqua Music Festival in New York and the Central City Summer Recital Series in Colorado. A great lover of chamber music and song, she was honored to perform a nationally broadcast recital for LIVE from the Gardens Recital Series in St. Louis.

Dr. Coleman has won many national competitions and awards, and she is a regional winner of the Metropolitan Opera National Council Auditions. Her opera role repertoire includes Gilda in Rigoletto, Adele in Die Fledermaus, Blonde in Die Entführung aus dem Serail, the Governess in Turn of the Screw, Monica in The Medium, and the title role in Cendrillon. She can be heard on the Newport Classic CD recording of Moore’s The Ballad of Baby Doe and as the lead role, Suleika, on Centaur Record’s world-premiere recording of Schubert’s Der Graf von Gleichen. She also recorded Concordia by Randol Alan Bass with the Buffalo Philharmonic Orchestra and Chorus.

Dr. Coleman has been recognized as an award-winning teacher of voice and opera. Her students have been invited to study at elite training programs including the San Francisco-Merola Program, Santa Fe Opera Program, the Chautauqua Opera Program, AIMS, SongFest and the Aspen Opera Program. Her students are singing operatic and musical theater repertoire around the world and on Broadway. Prior to her current appointment at CCM, Dr. Coleman served at the State University of New York at Fredonia. She has also taught at several prominent summer music programs including SongFest at Colburn in Los Angeles, the Vianden International Music Festival in Luxembourg and the CCM Spoleto Festival in Italy. Dr. Coleman is a frequent master teacher, adjudicator and speaker on issues related to vocal use in a solo context vs. a choral context. She lives in the greater Cincinnati area with her two children.