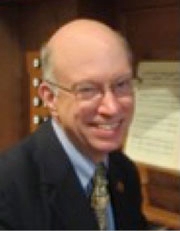 In recent years at CCM, John Deaver has taught the two-year Organ Repertoire course and Organ History and Design. Other courses he has taught since 2007 are Keyboard Harmony for Organists and Liturgical Organ Playing.  He has served Trinity Episcopal Church in Covington, Kentucky as Director of Music and Organist since September 1980 and the Convent of the Transfiguration (Episcopal) in Cincinnati, Ohio since October 1981.  At Trinity he founded and is a frequent performer on the monthly luncheon concert series A Midday Musical Menu.  He is active in the Cincinnati Chapter of the American Guild of Organists, which he has served as Dean, and the Association of Anglican Musicians, which he has served as Secretary, Publicist, and Secretary of the Anglican Musicians Foundation.