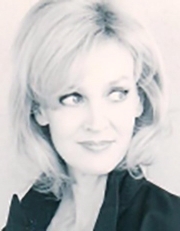 Karie-Lee Sutherland has worked professionally as a director, choreographer, writer and actor for more than 20 years. She toured the world as a singer/dancer for the DOD-USO, and is a veteran of over 1,500 live shows at Kings Island. She has also worked for King’s Productions, where she wrote and directed touring shows for Yogi Bear, Scooby Doo and The Flintstones. She was a Broadcast major at UC’s College-Conservatory of Music, and has received several Orchid awards, as well as a State Octafest Award for choreography. Sutherland has worked as a director, choreographer and actor for various schools and theatre companies in the Cincinnati area, including Covedale Center for the Performing Arts, Showboat Majestic, LaComedia Dinner Theatre and Educational Outreach Shows for Cincinnati’s Playhouse in the Park, where she also teaches Children’s Acting. This summer she attended the Broadway Teachers’ Workshop in NYC, where she took classes in dance, actor’s movement and directing with instructors from the Broadway productions of Newsies, War Horse, and from Tony Award-winning director John Rando.