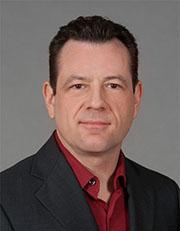 DePietro is the Founding Director of the Digital Innovation Lab: Education, Arts and Technology Incubator. He was also the first official Executive Director of UC's Emeriti Center.

DePietro is the author of the academic book Transforming Education with New Media, published by Peter Lang International Academic Publishers (New York, Bern, Berlin, Brussels, Oxford, Vienna). The journal Issues and Trends in Educational Technology (University of Arizona, publisher) described the book as "a thought-provoking discussion of the effectiveness of technology in the classroom" and "a valuable contribution."
Read Review | Buy Book

On topics related to new media and emerging technologies, DePietro has been published in academic journals, as well as the mainstream press. For his article "Tech in Europe: Cultural Reboot," he was awarded the International Award for Excellence by CG Research Networks. The article appeared in The Technology Collection, a collection of peer-reviewed journals that explores innovative theories and practices relating technology to society. DePietro is Associate Editor of the International Journal of Technology, Knowledge and Society.

DePietro served President William J. Clinton as the first Director of Digital Media at the Clinton Foundation in New York City and the Clinton Presidential Center, where he devised digital strategy to communicate the missions of both the Foundation and the Center, led a team in the design and development of new media platforms to support President Clinton’s six global initiatives, and integrated emerging and social media to achieve outreach, marketing, and fundraising goals. His team's work won an international award. He was Chairperson of the Department of Communication Arts at NYIT.

In New York City, DePietro previously held executive positions in Silicon Alley (Tech) and on Madison Avenue (Strategic Communications), where he created digital projects with international exposure for Fortune 500 companies such as American Airlines, American Express, Barnes and Noble, Dell, Pfizer, Hasbro, Western Union, and Westin Hotels. DePietro has been interviewed and/or reviewed by networks and national periodicals, such as NBC, NY Times, Crain's NY Business and Fox News. He was Producing Artistic Director of Manhattan Rep Company, based in NYC and producer of theatre worldwide.

DePietro has nine plays published by Concord Theatricals/Samuel French, the largest publisher of plays in the world. His interactive musical CLUE, based on the internationally popular board game, has been performed around the globe for two decades. In the 2021-2022 season, CLUE The Musical will have its London and Vienna premieres.