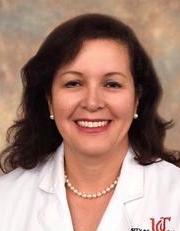 Gloria E. Valencia, AuD, CCC-A
Clinical Audiologist & Adjunct Assistant Profesor of Clinical
Gloria earned her bachelor degree in 1987 with a major in Communication Science and Disorders from the Catholic University of Manizales, Colombia. After graduation she joined the same institution as an undergraduate professor of audiology and performed this function for eight years. During this time she also worked as a clinical audiologist, clinical researcher, and supervised numerous students during their internships in the Audiology clinic.
In 1993, she attended a fellowship in electrophysiology at the Dr. Manuel Gea González Hospital and another in neurophysiology at the Instituto Nacional de la Comunicación Humana, both institutions located in Mexico City. At the end of the same year, she had an internship in two centers in Los Angeles, the House Ear Institute and the John Tracy Clinic.
In 1995 she relocated to the United States and enrolled in the Audiology Master program at the University of Cincinnati. After graduation in 2000, she worked for different Ear Nose and Throat (ENT) offices and hearing aid companies in the area. She has performed hearing screenings in different schools and Health Fairs around the Greater Cincinnati Area.
In 2009, Gloria joined the University of Cincinnati, where provides supervision to first year Au.D.on and off-campus evaluating and treating adolescents and adults with hearing problems. In addition, she forms part of the interdisciplinary group dedicated to the diagnosis and management of Central Auditory Processing Disorders.
Gloria earned her Doctoral degree in Audiology from Arizona School of Health Sciences, A.T. Still University in 2012.
Gloria has a special interest in people with diverse backgrounds and her bilingual skills (Spanish-English) provide her with a unique perspective in dealing with monolingual and bilingual populations. She is currently co-owner of Bilingual Audiology.

Investigators:Earl, B., Valencia, G. 07-01-2013 -06-30-2014 Center for Clinical and Translational Science and Training Towards a Clinical Diagnosis of Auditory Nerve Survival Role:Co-PI $25,000 Type:Grant

(2007. )How much do you know about the Hispanic/Latino Community? .

(03-03-2011. )Do you accept the challenge to work with non-English speaking and bilingual children in schools? .Texas Speech –Language-Hearing Association (TSHA, Houston, Texas.

(2000. )“Effects of Methylphenidate on the Neurophysiologic Measurements and the Auditory Processing Abilities of Children with Attention-Deficit Hyperactivity Disorders” .Second Annual Student Praise Conference, University of Cincinnati. .

2001 -To Present: Ohio Board of Speech-Language Pathology and Audiology Licensed Audiologist # A- 01441 State of Ohio