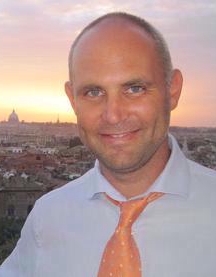 Steven Ellis (PhD Sydney, 2005) is a Roman archaeologist whose research activities and publications spring from his interests in ancient cities and urban life.  He has conducted fieldwork principally throughout Italy and Greece, but with other field activities in Spain, Portugal, France, Morocco, and Algeria.  Steven directs the University of Cincinnati's excavations at both Pompeii (the Pompeii Archaeological Research Project: Porta Stabia) and Tharros, Sardinia (the Tharros Archaeological Research Project); and co-directs (with Eric Poehler) the Pompeii Quadriporticus Project and (with Timothy Gregory) the 'East Isthmia Archaeological Project' in Greece.  The results of these activities are a range of publications that cover field reports to synthetic works, on diverse topics across the field of Classics such as Roman retail spaces; urban waste management; Greek and Roman superstitions; Roman coins; site formation processes; urban and sacred infrastructure; movement in cities; social structures and their hierarchies, especially the urban sub-elites; the use of new technologies in archaeological fieldwork; and the Roman fish-salting industry.  In 2011 he edited ‘The Making of Pompeii: studies in the history and urban development of an ancient city’ (JRA suppl. 85, Portsmouth, RI), while in 2018 he published 'The Roman Retail Revolution' with Oxford University Press.  The recipient of several major grants and fellowships (from the National Endowment for the Humanities, the American Council of Learned Societies, the Loeb Classical Library Foundation, National Geographic, and the 'Rome Prize' from the American Academy in Rome), his forthcoming work includes a multi-volume publication on the Pompeii excavations.  Steven is Associate Professor of Classics at the University of Cincinnati.

Roman urbanism and social history; ancient architecture; Greek and Roman art and archaeology; iconography of daily life; technological applications in the study of the ancient world; and the excavation of complex urban sites.