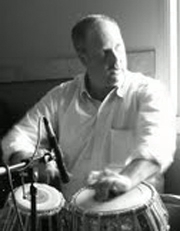 As a professional tabla player in Cincinnati, James Feist has been studying tabla since 1990 and has been fortunate enough to have learned in India from Ustad Allah Rakha and Pandit Yogesh Samsi. He has spent the last 11 years under the watchful eye of Pandit Yogesh Samsi. In 2006 he was awarded the American Institute of Indian Studies "Senior Performing Artist" grant to continue his study in India. He has lectured and performed at the Ohio State University, Washington University, Marshall university, and the University of Toledo amongst others.

He has recorded and/or performed in a wide spectrum of styles from a wide range of artists including: the Cincinnati Symphony Orchestra, Fareed Haque, Lakshmi Shankar, Kankana Banerjee, Mohenjo Daro, and Aradhna to name a few. As a composer his music can be heard on the National Geographic Channel, the Travel Channel, and Hugh Jackman's runaway Australian hit Aussie Goes Bollywood. He has been published in the Percussive Arts Society monthly magazine, Percussive Notes. Feist's ability to communicate to students in nuanced detail the many facets of the art of tabla is a direct result of sitting at his guru's feet for many years.