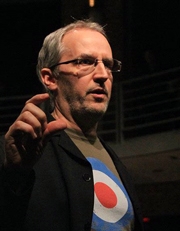 Michael Fiday, Professor, has been commissioned and performed extensively throughout the United States, Europe and elsewhere by a diverse range of performers such as Cincinnati Symphony Orchestra, Atlanta Symphony, American Composers Orchestra, Oakland East Bay Symphony, Percussion Ensemble of The Hague, pianists James Tocco and Marc-Andre Hamelin, and electric guitarist Seth Josel. His principal teachers in composition have included Richard Toensing at University of Colorado, George Crumb at University of Pennsylvania and Louis Andriessen, with whom he studied in Amsterdam under the auspices of a Fulbright Grant.

Fiday is the recipient of numerous awards, grants and residencies from, among others, the Fromm Foundation, the Barlow Foundation, BMI, ASCAP, American Composers Forum, Virginia Center for the Creative Arts, The MacDowell Colony, Yaddo, Headlands Center for the Arts and the Ohio Arts Council.