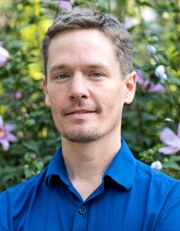 Stefan Fiol joined the CCM faculty in 2010 and is Professor of Ethnomusicology and Affiliated Faculty in Asian Studies. He researches music, dance, ritual practice, media and the histories of commercial and folkloric cultural representation the Uttarakhand Himalayas and North India. Professor Fiol’s monograph, Recasting Folk in the Himalayas: Indian Music, Media and Social Mobility, was published by University of Illinois Press in 2017 and received the Association for Nepal and Himalayan Studies Jim Fisher Book Award (Honorable Mention). His current research explores drumming as a historiographic tool in the central Himalayas, specifically through mapping drumming practice and reading shifts and continuities against insights from oral history, archaeology and sociolinguistics.

An emergent area of Fiol's research examines the role of music and mindfulness in stimulating memory, cognitive function, and experiences of awe and flow. Working with a team of music therapists and neurologists, Fiol has developed a service learning course that pairs music and medical students with individuals experiencing neurodegeneration, and their caregivers. Longitudinal analyses of data from this course will inform the optimal design of music and mindfulness interventions and will assess the relationship between artistic engagement with others and cognitive function.

Fiol's research has been published in Ethnomusicology, Journal of Asian Studies, Ethnomusicology Forum, Asian Music, Journal of South Asian Popular Culture and Yearbook for Traditional Music, as well as edited volumes including More than Bollywood (Oxford, 2014), This Thing Called Music (Rowman and Littlefield, 2015) and Music in Contemporary Indian Film (Routledge, 2017). His research has been funded by fellowships from Fulbright-Nehru, Wenner-Gren Foundation, American Institute of Indian Studies, National Endowment for the Humanities and the Arts Social Science and Humanities Faculty Research Program at the University of Cincinnati.

Fiol received his Ph.D. in Musicology from the University of Illinois at Urbana-Champaign in 2008 after conducting two years of ethnomusicological research in India, and shorter fieldwork projects in Chile, Paraguay and Zimbabwe. Fiol has been a visiting scholar in the South Asia Program at Cornell University, and has previously taught at the University of Illinois (2002-04), the University of Notre Dame (2005-06) and the Eastman School of Music (2008-10). Trained in classical piano, Fiol currently studies and performs on the Indian sitar, the Zimbabwean mbira dzavadzimu and a range of central Himalayan percussion and melody instruments.

(2011. ) Sacred, Inferior, and Anachronous: Deconstructing Liminality among the Baddi of the Central Himalayas .Ethnomusicology Forum, , 19 ,191-217

(2011. ) From Folk to Popular and Back: Assessing Feedback between Studio Recordings and Festival Dance-Songs in Uttarakhand, North India .Asian Music, , 42 (1 ) ,24-53

(2012. ) Articulating Regionalism through Popular Music: The Case of Nauchami Narayana in the Uttarakhand Himalayas .Journal of Asian Studies, , 71 (2 ) ,447-474

Dialects of Dhol: Mapping Rhythm, Memory and History in the Central Himalayas .

(2015 ) One Hundred Years of Indian Folk Music: The Evolution of a Concept This Thing Called Music: Essays in Honor of Bruno Nettl .Rowman and Littlefield Press

2008 Nicholas Temperley Award for Excellence in a Dissertation in Musicology, University of Illinois at Urbana-Champaign