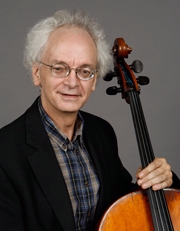 Lee Fiser studied with Lynn Harrell at the Cleveland Institute of Music and Leslie Parnas at Boston University. He is a former member of Cleveland Concert Associates and Cincinnati Symphony. As cellist for the LaSalle Quartet from 1975 until the Quartet's retirement in 1988, he has performed in over forty international concert tours and has given chamber music performances with James Levine, Lynn Harrell, Benita Valente, Richard Goode, Paula Robison and the Tokyo String Quartet.

Fiser has appeared at European festivals, chamber music master classes and workshops. Recording exclusively for Deutsche Grammophone, he released Beethoven: The Late Quartets, which won the Grand Prix du Disque in Paris and several other international prizes. He is also a juror at international chamber music competitions.