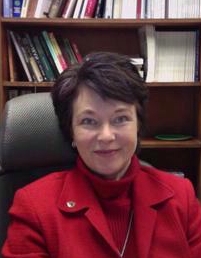 Professor Frierson came to the study of the Middle East and North Africa after beginning to see the wide gap between reality in the Middle East and U.S. perceptions of the region in the early 1980's. She took her B.A. in Comparative Religion from the University of Vermont and her M.A. and Ph.D. in Near Eastern Studies from Princeton University. She has published several articles on late-Ottoman politics and society, co-edited with Camron Amin and Benjamin C. Fortna The Modern Middle East: A Sourcebook for History (Oxford University Press), and is finishing a manuscript entitled Patriarchal Feminism for Syracuse University Press. She has received several fellowships and awards for research, development of teaching materials, and acquisition of library materials for UC, including from Fulbright, Fulbright-Hays, and the American Research Institute in Turkey, and has been an invited speaker and workshop participant in the U.S., Turkey, Israel, and Europe, as well as a visiting fellow at Middle East Technical University (Ankara), Hacettepe University (Ankara), Cornell University, UCSB, Princeton University. Her Ph.D. students have been Carole Woodall and Lerna Ekmekcioglu of NYU, Julia Phillips Cohen of Stanford, Ufuk Adak and Ali el-Tarhuni at the University of Cincinnati, and Harry Bastermajian of the University of Chicago.  She has served on fellowship committees for the American Research Institute in Turkey, the Institute of Turkish Studies, the Social Science Research Council, and the National Endowment for the Humanities, and served for two years as a mentor to the Mellon-funded Minority Access to Research Careers summer program at Princeton.  She speaks frequently to community groups and the media about the history of the Middle East and North Africa, and current events. Her current research focuses on refugee management in WWI, and the changes in science, personnel, and practices of pharmacology in the 19th and early 20th centuries in Europe and the Middle East.

General: Islamic modernism; development of a public sphere in the late-Ottoman Empire; the role of gender in reformist and revolutionary state ideologies; policing and surveillance in Hamidian society; World War I; Near Eastern perspectives on the Far East and the West; historiography of gender and non-Western cultures; comparative and world history; pharmacology.

Trained as a political, intellectual, and women's historian, Dr. Frierson is currently carrying out research on refugee flows in Istanbul and Anatolia between 1877 and 1928, and port cities as a mode of analysis for modernization.  She has opened a new research stream on changes in pharmacology in the 19th century in Europe and the Middle East.  Her sources encompass print material and archival resources drawn from police records, court cases, city planning, and ministerial records of public order, refugee management, and social services.

Frierson, Elizabeth B. "Patriarchal Feminism: Gender and the Public Sphere in the Ottoman Empire." (2017 - EDP).

Frierson, Elizabeth B. "“Mirrors Out, Mirrors In: Domestication and rejection of the foreign in late-Ottoman women's magazines (1875-1908), " Women, Patronage, and Self-Representation in Islamic Societies, edited by D. Fairchild Ruggles, 177. New York: SUNY Press, 2000.

Frierson, Elizabeth B. "The debatability of Islam in late-Ottoman serials and censorship."" ISIM Newsletter 2 (1999): 23.

(04-14-2009. ) Shadows of the City: Tracking and Managing Populations in Istanbul During WWI and the Occupation .Ertegün Foundation Lecture, Princeton University/Department of Near Eastern Studies.

(04-27-2008. ) The Politics of Home: Istanbul/Constantinople during World War I .Conference on World War I in the Ottoman Empire, University of Richmond. Other Institution. .

(04-23-2008. ) Broken Home: Istanbul/Constantinople during World War I .The Ohio State University. Other Institution. .

(02-04-2008. ) The Politics of Home: Istanbul/Constantinople during World War I .Middle East History and Theory Workshop, University of Chicago. Workshop. .

(12-08-2006. ) ’Is there any future for us in trying to be ladylike?: Terms of transgression in Hamidian Istanbul .Women and Islamic Law Seminar , University of Pennsylvania . Other Institution. .

(04-07-2006. ) Women in the Arts and Writing: Negotiating the Ottoman Public Sphere in the 9th and early 20th Centuries .Bogazici University/Istanbul. Other Institution. . Level:International

(01-26-2005. ) Media and Society in the Late-Ottoman Empire and Early-Republican Turkey .Turkish Studies Symposium, University of Illinois. Other Institution. .

(05-05-2005. ) Negotiating the Nation: Images, Literacy, and Consumption Politics in the Hamidian Era .Seminar on Ottoman and Turkish Studies, Columbia University . Other Institution. .

(05-10-2005. ) Women and War in the Ottoman Empire .Princeton University/Department of Near Eastern Studies . Other Institution. . Level:Department

(04-13-2002. ) Vazife ve mes’uliyet: duties and responsibilities in Istanbul’s public sphere (1876-1909) .Conference on Religion and Society in the Late Ottoman Empire, cosponsored by the UCLA Center for Modern and Contemporary Studies, Von Grunebaum Center for Near Eastern Studies, Department of History, Division of Social Sciences, Center for the Study of Religion, University of California - Los Angeles. Conference. . Level:University

(11-15-1999. ) Duties and responsibilities: Creating modern Ottoman patriots in the Hamidian era (1876-1909) .University of California at Santa Barbara Center for Islamic and Near Eastern Studies. Other Institution. . Level:Department

(10-12-1996. ) Cheap and Easy: The creation of consumer culture in late-Ottoman Istanbul .Seventh Biennial Conference on the Ottoman Empire and the World-Economy, SUNY/Binghamton. Conference. . Level:University

Elizabeth B. Frierson (05-24-2012. ) The Role of Media in the Arab Spring .The Freedom Center, Cincinnati, Ohio. Other Institution. . Level:Local

(02-01-1999. ) Islamic law and the position of women in Afghanistan .University of Cincinnati/Center for Women’s Studies. UC. Level:Department

(06-15-2008. ) ’Why should we give our money to those old crones?’: Women and Interethnic Tensions in the Late Ottoman Era .Conference. Level:Prof. Org.

1995 -1997 Ömer Lütfi Barkan Prize for the best article in the field of Ottoman and Turkish studies (Turkish Studies Association) Type:Recognition

2011: Fellowships Committee for Africa and Middle East (film), National Endowment for the Humanities

2009: Fellowships Committee for Africa and Middle East, National Endowment for the Humanities

1998: Co-organizer, Conference on Gender and the Practice of Law in the Ottoman Empire (April) Princeton University,

War and Peace in the Modern Middle East

Atrocities and Memory in the Middle East World War I Level:Graduate

Law and Reform in Islamic Societies

Interviewed for Cincinnati Enquirer and Post articles on 9/11, Bin-Laden, women in Afghanistan, Iraq and Afghanistan Wars 2003-present, op-eds on the Arab Spring ,