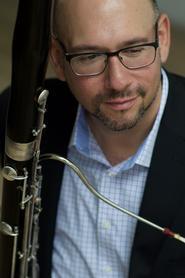 Martin Garcia is the associate principal bassoonist of the Cincinnati Symphony Orchestra. A former member of the Milwaukee Symphony and the Chamber Orchestra of Philadelphia, he was an active freelancer in the Philadelphia area and has been heard in concert with many of that region's groups, including the Philadelphia Orchestra. His primary studies were with Bernard Garfield at the Curtis Institute of Music, Milan Turkovic at the Universität für Musik und Darstellende Kunst in Vienna, and William Winstead at the University of Cincinnati College-Conservatory (under the auspices of an Albert C. Yates fellowship). He undertook further advanced study with Daniel Matsukawa.

With the Cincinnati Symphony, he has played concerts on tour in Japan, New York, and as acting principal bassoonist in China, Hong Kong, and Europe in 2017. As an educator, he is past faculty for Temple University's Music Preparatory Department, "Summerfest" at the Curtis Institute of Music, and has given masterclasses at the Oberlin Conservatory, Wright State University, and the Central Conservatory in Beijing, China. In 2021, he represented the Curtis Institute and the Cincinnati Symphony as inaugural faculty for OAcademy, a digital orchestral academy serving young musicians in twenty countries of the Americas and has been invited to return in 2022.

He has participated in the festivals of Sarasota, Evian, Verbier, Vienna Modern, Lakes Area (MN), and Marlboro Music. Outside of Cincinnati, he occasionally concertizes and records with the New York-based chamber orchestra, The Knights. His latest release with them is an album of the Brahms and Beethoven concerti with violinist Gil Shaham, which was recently nominated for a Grammy.

BM: The Curtis Institute of Music

Fulbright grant : The University of Vienna