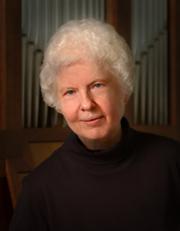 Professor Emerita Roberta Gary retired from CCM's full-time faculty in 2013. She is an adjunct faculty member during the fall 2022 academic term.

Gary studied piano with Olga Conus and organ with Wayne Fisher, David Craighead, Arthur Poister, Bernard Lagace, William Porter, Harald Vogel and Edward Parmentier. Her solo recitals and workshops have been given in Dallas, Atlanta, New York City, Los Angeles, Seattle, Boston, Pittsburgh and Montreal. She taught at the Choate Organ-Harpsichord Seminars in Wallingford, Connecticut from 1973-80. In 1966, 1976 and 1990 she was a recitalist at the National Conventions of the American Guild of Organists. She taught Bach Week at Columbia College, SC (1987-1996); Scranton Summer Organ Week (1981-83); and at Capital University in Columbus, Ohio (1965-67). She has given lectures and master classes on Bach, 19th century romantic literature, early performance practice, movement and ease based on the Alexander Technique and organ pedagogy. In 2001, she recorded Reubke and Liszt on the Arsis label. She is a certified Andover Educator.