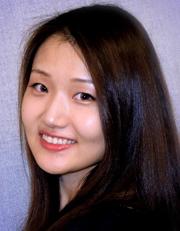 Born in China, Moni (Jasmine) Guo began studying music at the age of three and pursued piano and composition studies at Interlochen Arts Academy, the Peabody Institute of the Johns Hopkins University and Rice University. She is currently a PhD candidate at UCLA studying composition under Richard Danielpour, Peter Golub, Ian Krouse and Kay Rhie.

Guo is now a member of the Pi Kappa Lambda Society, the American Society of Composers, Authors and Publishers (ASCAP) and the Alliance for Women Film Composers. Over the years, she has received a number of awards and fellowships, including the 2021 ASCAP Morton Gould Award, the second place prize in the orchestra music division of the American Prize competition in 2020, the grand prize of the Texas New Music Ensemble student composition competition in 2018, the Joint Chinese College Alumni Association Scholarship in 2017, the Brown Fellowship from Rice University in 2016-17, the P. Bruce Blair Award in Composition and the Pauline Favin Memorial Award in Piano in 2016. She is also a finalist of the 2019 American Composers Orchestra Sarasota Orchestra Competition and the 2020 ASCAP Morton Gould Award. Her chamber piece Fallen Skin, Flying Wings has also been performed at the Hear Now Music Festival in Los Angeles. Her music has been performed in the US, Puerto Rico, Germany and Italy.

Currently focusing her study on scoring for visual media arts, Guo has scored more than 30 short films. Many of those films have won or been nominated for awards, including the Student Academy Awards of 2021. Guo currently serves as the assistant to film composer Sharon Farber, with whom she also helps with orchestration and music preparation. Films she has scored or orchestrated have been screened at film festivals such as the AFI Fest, the Los Angeles Asian Pacific, Sundance and Berlinale, among others.