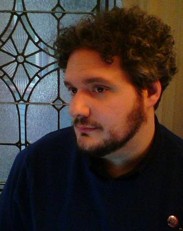 Michael S. Hennessey is the editor of PennSound (a web archive of more than 22,000 poetry recordings, boasting more than 25 million annual downloads) and Jacket2 (archives and continues the mission of John Tranter's Jacket Magazine, one of the web's first and best venues for poetry and poetics), as well as the faculty advisor for Short Vine, UC's undergraduate literary journal.

Recent scholarly publications include essays on Charles Bernstein's "1-100" (in English Studies in Canada's special "Sound and Event" issue, for which he also served as audio editor) and Ted Berrigan and Harris Schiff's Yo-Yo's with Money (in Inverval[le]s) as well as forthcoming pieces in The Journal of Electronic Publishing and Jacket2, along with book chapters in Audiobooks, Literature, and Sound Studies (Routledge, 2011) and The Salt Companion to Charles Bernstein (Salt Publishing, 2011).

His poetry has appeared in Jacket, EOAGH, Cross Cultural Poetics, Elective Affinities and Horse Less Review, as well as in the chapbooks Last Days in the Bomb Shelter (17 Narrower Poems) (2008) and [ static ] (2009).  You can listen to several archived readings on his PennSound author page.

2007 -To Present Editor, PennSound, The Center for Programs in Contemporary Writing, University of Pennsylvania, Philadelphia, PA

2010 -To Present Editor, Jacket2, The Center for Programs in Contemporary Writing, University of Pennsylvania, Philadelphia, PA

"Your Voice" in Binding Bound Restricted (chapbook). The Common Press 2007.

"From Text to Tongue to Tape: Notes on Charles Bernstein’s ‘1-100’” in "Discreteness: A Survey"." English Studies in Canada "Sound and Event" issue. [Link]

"Spare Parts," "These Are My Twisted Words" and "My Own Disaster" in Elective Affinities (May 2010):

"Towards No Horizon," "A Loose Association to Departure" and "An Anthology of Lost Hotel Rooms" in EOAGH #5 (Fall 2009):

"No New Money (History is Broken)" in Fooling Around in Prose: An Anthology of Postmodern American Fiction (ed. DeWitt Henry). 2007.

"Forgive Me" in What If?: Writing Exercises for Fiction Writers (3rd Edition) ed. Pamela Painter and Anne Bernays.  Longman, 2009.

(12-06-2010. ) Without Precedent: Daisy Aldan and A New Folder .The Kelly Writers House, University of Pennsylvania, Philadelphia, PA. Other Institution. Level:National