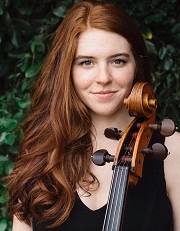 Hannah Hoffman is a cellist and music educator from Jacksonville, Florida. She attended Brevard Music Festival as a high school student and, at 18 years old, soloed with the Jacksonville Symphony Orchestra, playing Haydn Cello Concerto in C.

She has a bachelor’s degree in cello performance from the University of North Florida where she studied under Nick Curry. In her time at UNF, Hoffman won ASTA Florida Chapter’s Young Artist Award, co-presented at the Florida Music Education Association’s annual conference, was an intern at the Tennessee Valley Music Festival in Huntsville, Alabama for two summers, and was the cello instructor at the Fine Arts Summer Academy in Nashville, Tennessee. Hoffman has attended the Meadowmount School of Music, where she studied with Melissa Kraut and Hans Jorgen Jensen; the Sitka Cello Symposium, studying with Melissa Kraut and Zuill Bailey; and Great Wall International Music Festival, where she studied with Alan Rafferty and Yao Zhao. In her senior year, Hoffman soloed with the UNF Orchestra playing Rococo Variations.

Hoffman is a registered Suzuki teacher and enjoys teaching both private lessons and group classes for the CCM Preparatory Department, Cincinnati Young Artists and the Suzuki Strings Program of Hyde Park School. Hoffman has played in master classes for David Finckel, David Ying, Matt Haimovitz, and Alisa Weilerstein. Hoffman is currently a doctoral student at the University of Cincinnati College-Conservatory of Music where she studies under Alan Rafferty. After she graduates with her DMA, she hopes to teach at a university.