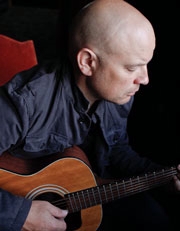 Ric Hordinski, a faculty member since 2012, has a long history of composing, performing and recording. He’s appeared on over 200 records with people like Jim James (my Morning Jacket) Phil Keaggy, John Mayer, David Wilcox, Bootsy Collins, Tony Levin, Bill Kreutzmann (Grateful Dead), Victor Wooten, Robbie Fulks , etc, on labels like Warner Brother, Emi, Universal and Sub-Pop. As a live performer he’s shared the stage with a dizzying array of musicians: Johnny Cash, Moby, Bob Dylan, My Morning Jacket, Indigo Girls, and many others. He seems to be one of the few musicians able to straddle comfortably the distance between ground-breaking avant-garde explorations (witness his association with people like David Torn) and truly beautiful classical and popular music. Ric performed as a featured musician with the Cincinnati Opera in 2017 and is a frequent collaborator with the Concert:Nova subset of the Cincinnati Symphony Orchestra. He received and ArtsWave Grant in 2018 for the compostion of the soundtrack to the movie "Now. Here.  This."
Paste Music has called Hordinski "the rarest kind of virtuoso....” He received a Grammy nomination in 2003, and won a Dove award in 2004. He’s composed and recorded music for several feature Motion Pictures (including The Hunger Games) and documentaries (most recently The PBS American Masters Series feature on the architect I.M. Pei entitled "Coming Home.”