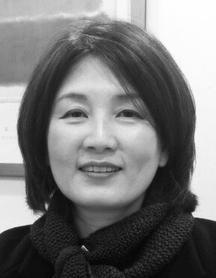 Injoo Kim is a Full Professor in the Fashion Design Program at the University of Cincinnati. Since joining the University of Cincinnati, Professor Kim has been engaging in her research of holistic design thinking. Her focus is on apparel product development across age and gender through fit and size studies to improve the users experience and their environments, as well as the exploration of knitting methodologies to enhance the wearability of apparel. She has also been working on pedagogical research, focusing on sustainable fashion including inclusive, circular, virtual and ethical design. Prior to joining UC, she worked in fashion industry for 9 years in Tokyo, New York, Cincinnati OH and Lexington KY.

She envisioned, planned, and proposed two labs, resulting in the establishment of the Fashion Sewing Lab and Fashion Technology Center at the College of DAAP. She was a PI for several interdisciplinary projects sponsored by Luxottica, UC Medicine, and more. Professor Kim's research and scholarly work has resulted in multiple publications. She has co-authored six books published by well-known publishers as well as many peer-reviewed journals. She has received research grants from UC Research Council's Summer Research Fellowship and Third Century Fellowship. She has received grants for software and training through Gerber and Lectra Systems. She has been awarded the Outstanding Teaching and Outstanding Research awards.