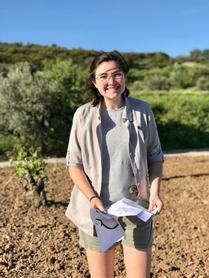 Charlie Kocurek is a second-year PhD student in Classical Archaeology. She received her BA Honours in Greek and Roman Studies from the University of Victoria in 2019 with a thesis entitled “Cemeteries in the Periphery: Isolating Archaic/Classical Funerary Contexts Surrounding the Acropolis of Ancient Eleon Through Archaeological Field Survey”. Her research interests include the material manifestation of regional cult activity in the ancient Greek world, ceramic production and trade, hero cult and ancestor worship, and archaeological survey. Charlie works as a ceramic analyst at ancient Eleon in Boeotia with the Eastern Boeotia Archaeological Project. She is currently working on a study of miniature vessels from the site.