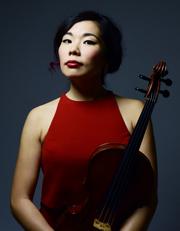 Hailed by the Philadelphia Inquirer for her "magnetic, wide-ranging tone" and her "rock solid technique," Ayane Kozasa is a sought-after chamber musician, collaborator, and educator. Since winning the 2011 Primrose International Viola Competition—where she also captured awards for best chamber music and commissioned work performances—Kozasa has appeared on stages across the world, from Carnegie, Wigmore and Suntory Hall to Ravinia, Aspen and the Marlboro Music Festival. She is a passionate advocate for the expansion of viola repertoire, and has commissioned multiple new works featuring the viola, including “American Haiku” by Paul Wiancko and “K’Zohar Harakia” by Judd Greenstein.

Kozasa is a founding member of the Aizuri Quartet. The ensemble was the 2018 quartet-in-residence at the Metropolitan Museum and the grand prize winners of both the Osaka International String Quartet Competition and MPrize Chamber Arts Competition. The Aizuri Quartet’s debut album, Blueprinting—which features the music of five American composers, all commissioned by the quartet—was nominated for a Grammy Award and named one of NPR’s top 10 classical albums of 2018. With collaboration being a deep part of ensemble's identity, the Aizuri Quartet has performed with artists such as Wilco, Marcy Rosen, Michi Wiancko and Maeve Gilchrist. Most recently, the quartet received the Cleveland Quartet Award from Chamber Music America, a biennial award given to a string quartet that is establishing a major career. The quartet member's devotion to education brings them to young musicians around the world, and they regularly lead student composer workshops at institutions such as the University of Southern California, Princeton University and New York Youth Symphony. In 2020, the quartet launched AizuriKids, an interactive web series for children that explores relationships between music and themes ranging from astrophysics to cooking. As WQXR’s 2022 Artist Propulsion Lab winner, the quartet will be launching additional AizuriKids videos later this year.

Kozasa is also a member of the duo Ayane & Paul with composer and cellist Paul Wiancko, with whom she collaborated on Norah Jones’ album Pick Me Up Off the Floor. The duo has appeared at several festivals, including Spoleto Festival USA, Brooklyn Chamber Music Society and Music from Angel Fire. As a seasoned orchestral performer, Kozasa has performed with the Orpheus Chamber Orchestra, A Far Cry, Philadelphia Orchestra, East Coast Chamber Orchestra, the Saint Paul Chamber Orchestra and the Chamber Orchestra of Philadelphia, where she served as principal violist from 2012 to 2016. Kozasa's most recent passion project Owls is a quartet collective with violinist Alexi Kenney and cellists Gabriel Cabezas and Paul Wiancko. Owls share an uncommonly fierce creative spirit, weaving together new compositions with original arrangements of music ranging from the 1600s to the present. Upcoming shows include appearances at the Baryshnikov Arts Center in NYC and The Phillips Collection in Washington, D.C.