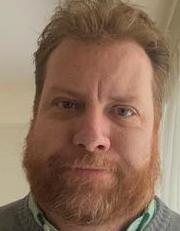 Brendan Landell is a sixth year Ph.D. student in Classical Philology. Brendan received his B.A. from Thomas Aquinas College in 2003, and taught high-school for seven years before resuming his studies. He completed the Post-Baccalaureate Program in Classical Studies at the University of Pennsylvania in 2011, and in 2016 received his M.A. in Classics from Washington University in St. Louis (in-between he took a break to care for his parents). Brendan is currently writing his dissertation on the perceived audience in ancient literary criticism.