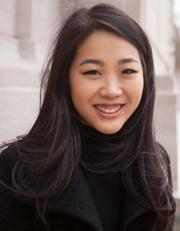 A recipient of the 2015 Avery Fisher Career Grant, as well as a top prizewinner of the 2012 Walter W. Naumburg Competition and the Astral Artists’ 2010 National Auditions, Kristin Lee is a violinist of remarkable versatility and impeccable technique who enjoys a vibrant career as a soloist, recitalist, chamber musician and educator. “Her technique is flawless, and she has a sense of melodic shaping that reflects an artistic maturity,” writes the St. Louis Post-Dispatch, and The Strad reports, “She seems entirely comfortable with stylistic diversity, which is one criterion that separates the run-of-the-mill instrumentalists from true artists.”

Born in Seoul, Lee began studying the violin at the age of five, and within one year won First Prize at the prestigious Korea Times Violin Competition. In 1995, she moved to the United States and continued her musical studies under Sonja Foster. Two years later, she became a student of Catherine Cho and Dorothy DeLay in the Juilliard School’s Pre-College Division. In January 2000, she was chosen to study with Itzhak Perlman. Lee holds a Master’s degree from the Juilliard School. She is the co-founder and artistic director of Emerald City Music in Seattle.