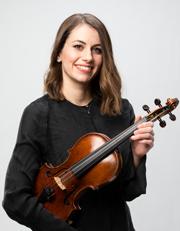 Praised by the Washington Post for her “temperament and clear musical purpose” and “great technical maturity,” Stefani Matsuo has emerged as one of today’s great talents. She was appointed by Maestro Louis Langrée as Concertmaster of the Cincinnati Symphony Orchestra in September 2019.

As Concertmaster of the CSO, which also performs and records as the Cincinnati Pops, Matsuo led the orchestra under Maestro Langrée for the Grammy nominated album, Transatlantic. She also had the honor of premiering Missy Mazzoli’s Fanfare for the Unimpressed for solo violin as part of the CSO’s Fanfare Project. In 2019, Matsuo made her solo debut with the CSO, performing Mozart Violin Concerto No. 4, where she was applauded by the Cincinnati Business Courier for her “effortless technique”, “old world sound”, and “irresistible freshness of spirit.”

Prior to joining the CSO, Matsuo made her New York City debut in Alice Tully Hall performing the Britten Violin Concerto with the Juilliard Orchestra under the baton of Jeffrey Kahane. She made her solo recital debut at the Phillips Collection in Washington D.C. as the winner of the 2012 Washington International Competition. Matsuo was also the winner of the 2012 Juilliard Concerto Competition and a laureate of the 2011 Michael Hill International Competition.

As a dedicated chamber musician, Matsuo has collaborated with many distinguished artists such as Itzhak Perlman and Gil Shaham, among others. In Cincinnati, she serves as a co-artistic director of the innovative chamber ensemble concert:nova, and is a regular performer on the CSO Chamber Players Series and Linton Chamber Music Series. She is also a member of Matsuo Duo with her husband and CSO cellist, Hiro Matsuo. Together, they have co-commissioned and premiered Strange Loops by Michael Ippolito, and have performed in North America, Japan, and Taiwan. In New York City, she performed regularly with Jupiter Chamber Players and Salomé Chamber Orchestra. She also served as concertmaster of Symphony in C and as a member of the first violin section of the Indianapolis Symphony Orchestra.

She completed her Master’s Degree in Music at the Juilliard School under the tutelage of Sylvia Rosenberg, and has a Bachelor’s degree from the Cleveland Institute of Music where she studied with Paul Kantor. Matsuo originally hails from North Carolina.