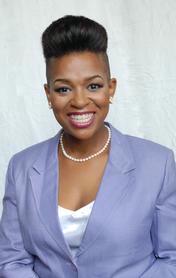 Hailing from the University of Wisconsin-Madison, Holly Y. McGee specializes in U.S. History and African American History, with an emphasis on black women’s activist and intellectual history, comparative political activism in the United States and South Africa, and popular culture in the twentieth century.  Secondary specialties include local histories of the American South, South African women’s history, and oral histories.  Currently, Dr. McGee teaches undergraduate courses in black history and film, culture and counterculture, and African American history in early and colonial America.

Presently, Dr. McGee is conducting research for her book, a biographical oral history of South African activist Elizabeth Mafeking.  Mafeking was one of four women featured in Dr. McGee's dissertation, “When the Window Closed: Gender, Race, and (Inter)Nationalism, the United States and South Africa, 1920s-1960s,” which put into conversation existent and new scholarship regarding black radical women of the Left in the United States and South Africa during the twentieth century and was primarily concerned with the evolution of women’s protest from localized issues of race-based discrimination to international, anti-colonial protests of the era.

Dr. McGee’s most recent publication credit, “‘It was the wrong time and they just weren’t ready’: Direct-action protest at Arkansas Agricultural, Mechanical & Normal College (AM&N),” appeared as a reprint in Arsnick: The Student Nonviolent Coordinating Committee in Arkansas, an edited collection on SNCC’s pivotal role in transforming the status of racial discrimination in Arkansas in the 1960s.  Additionally, she has forthcoming articles in the fields of local Arkansas history, and South African women's history.

“‘It was the wrong time and they just weren’t ready’: Direct-action protest at Arkansas Agricultural, Mechanical & Normal College (AM&N)” in The Arkansas Historical Quarterly vol. 66, (Spring 2007): 18-42.

“Before the Window Closed: Internationalism, Crossing Borders, and Reaching Out to Sisters across the Seas’” in The Journal of South African and American Studies (Safundi), Volume 19, 2018 – Issue 1: Transnational Networks of Gender and Race in South Africa and the United States, pp. 77-92.

“One Day We Are Going Home”: Radical Antiapartheid Internationalism and Exile in the Life of Elizabeth Mafeking (under contract)

America in the Sixties Level:Undergraduate

Junior Topics: Africa is Not a Country Level:Undergraduate

Gender and Politics in the New South Africa Level:Undergraduate