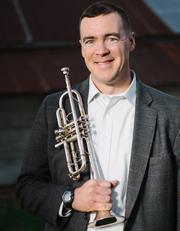 Known for his strong and beautiful sound, Michael Mergen is currently a member of the trumpet/cornet section of “The President’s Own” United States Marine Band. He also performs with the Blossom Festival Band in Ohio and is a founding member of Valor Brass. In addition, Mergen has performed with the National Symphony Orchestra in Washington, D.C., the Washington Symphonic Brass, the Singapore Symphony in the Republic of Singapore, the Harrisburg Symphony in Pennsylvania and the Choral Arts Society of Washington. He was a Fellow at the Tanglewood Music Center in Lenox, Massachusetts, and attended the Aspen Music Festival. He has worked with conductors Seiji Ozawa, Leonard Slatkin, Osmo Vanska, John Williams and Bramwell Tovey.

Dedicated to education, Mergen currently serves as guest artist and applied faculty at the Penn State Honors Music Institute teaching trumpet. In addition, he has given numerous master classes at world-class institutions including The Juilliard School, University of Michigan, Eastman School of Music, University of Illinois and many others. He has brought his passion for music education to middle and high schools in the Washington D.C. area as part of the Marine Band’s “Music in the Schools Initiative,” formulating a rich program for brass quintets, which he has led in numerous performances. Mergen also maintains a studio of private trumpet students.

As an active soloist, Mergen’s solo performances include numerous appearances with the “The President’s Own” United States Marine Band and most recently with the Allentown Band, which was televised in Pennsylvania. He sounded Taps for the White House moment of silence in observance of 9/11 in 2018 and 2019 as well as the 2017 nationally televised Memorial Day Concert at the US Capitol. He also co-commissioned Hanging by a Thread, a four-movement work for solo trumpet and solo tuba with wind ensemble by James Stephenson and with his brother Paul gave the U.S. premiere with the DePauw University Concert Band in 2018. Recordings of his solo performances can be heard on both the “The President’s Own” United States Marine Band YouTube channel and website. Additional non-solo recordings include numerous volumes of the U.S. Marine Band’s annual recording as well as the Valor Brass recording Inaugural.

Mergen began his musical journey at age nine. His early studies included The Juilliard School Pre-College and the Kinhaven Music School summer program. He received his Bachelor in Music degree in both Trumpet Performance and Music Education from the University of Michigan, his Master of Music degree in Trumpet Performance from Eastman School of Music, and he completed the Doctor of Music Arts degree in Performance from The Catholic University of America in 2008. He is honored to have studied with Charles Daval, Charles Geyer and the late Armando Ghitalla.

A lifelong learner, when not performing or teaching, Mergen further channels his passion for music into creating arrangements for brass quintet and trumpet ensemble, and exploring the history of the trumpet and cornet.