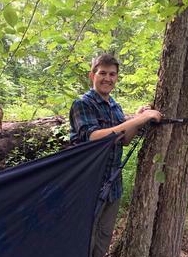 I am interested in understanding how sexual selection leads to morphological diversification and speciation. I use the courtship displays of jumping spiders in the genus Habronattus as a model to answer these questions. Because they have recently evolved a filter to better discriminate long-wavelength colors, they are able to inhabit novel morphospaces. By comparing these displays at different time scales (both inter- and intra-species comparisons), I hope understand how different selective pressures influence the spiders’ ability to move into that new character space.