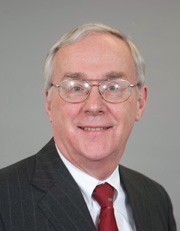 Joseph H. Nevin received the B.S.E.E., M.S. and Ph.D. degrees in electrical engineering from the University of Cincinnati. In 1967 he joined the Electrical and Computer Engineering faculty at the University of Cincinnati where he is now a Professor. Part of his research thrust in the past has been directed toward the study of electronic materials used in integrated circuit fabrication. Recent research activity is directed toward the development of integrated circuit sensors along with the analog circuits necessary for signal processing. Pressure, humidity and chemical sensors have been fabricated as a part of this research program. He currently serves as an Assistant Dean in the College of Engineering and Applied Science.