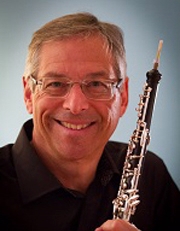 A faculty member since 1996, Mark Ostoich retired from CCM in June of 2021. In connection with CCM, Ostoich served as artist-faculty of the CCM Spoleto Festival in Spoleto Italy, as well as the Lucca Festival and Opera Theatre of Lucca (Italy) and CCM’s Grandin Festival. He performs extensively in solo and chamber music settings and is in demand as a recitalist and clinician for master classes. Along with clarinetist Steve Cohen of Northwestern University, and bassoonist William Ludwig of Indiana University, Ostoich performs and tours regularly as the Trio Cayenne and Lyric Winds.

For the last 16 years he has been the featured teacher of the Oboes at Oxford oboe camp, now held at Reinhardt College in Georgia each July and Midwest Oboe Camp at Wittenburg University in Ohio. He has also served as artist-teacher for the Advanced Double Reed Institute in Texas.