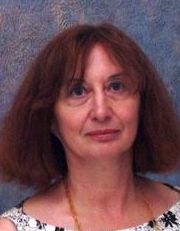 ~~Magda Peligrad is a professor in the Department of Mathematical Sciences, whose area of expertise is Probability Theory. Her research deals with dependent structures and covers various aspects of modeling dependence, maximal inequalities and limit theorems. Some of her results have immediate applicability to Statistics of dependent data, Nonparametric statistics and  Ergodic theory, making her field of research interdisciplinary. The results of her research are the subject of over 100 papers and chapters in various books, and were presented in a large number of lectures and talks at meetings, in the United States and abroad. Her research was rewarded by numerous National Science Foundation, National Security Agency, and Taft research center grants.  In 1995 she became an elected fellow of the Institute of Mathematical Statistics; in 2003 she received the title of distinguished Taft Professor. In 2010 her contributions to Probability theory were recognized in a meeting held in her honor in Paris, France. In 2017  she became a graduate fellow of the University of Cincinnati. Magda Peligrad serves on the editorial board of the Journal of Mathematical Analysis and Applications. She is also serving on the Committee of Fellows of the Institute of Mathematical Statistics. She was a doctoral adviser for eight Ph.D. students and hosted two postdocs.

Ph D., Center of Statistics of the Roumanian Academy of Science. 1981

Probability Theory and Stochastic Processes, with a stress on dependent structures and their limit theorems that can be an immediately implemented in Statistics.

The universality of spectral limit for random matrices with martingale differences entries  (with F. Merlevede, and C. Peligrad) (2015); Random Matrices Theory and Applications 4 1-33

On the universality of the limiting spectral distribution for a large class of random matrices with correlated entries  (with Florence Merlevede, Marwa Banna). (2015);  Stoch.Proc. Appl.  125  2700-2726

On kernel estimators of density for reversible Markov chains (with M. Longla and H. Sang)
Statistics and Probability Letters 100 (2015) 149-157

On the product of random variables and moments of sums under dependence (2016), High Dimensional Probability VII: The Cargèse Volume.  Progress in Probability. Springer Switzerland 155-172.

Law of the iterated logarithm for the periodogram  (with Christophe Cuny and Florence Merlevède).  (2013) Stochastic Processes and their Applications 123 4065-4089

Rosenthal-type inequalities for the maximum of partial sums of stationary processes and examples (with Florence Merlevède) (2013). Annals of Probability 41  914-960

On the functional CLT for reversible Markov Chains with nonlinear growth of the variance  (with  M. Longla, and C. Peligrad) (2012). Journal of Applied Probability  49 1091-1105.

On the invariance principle under martingale approximation (with Costel Peligrad) (2011); Stochastics and Dynamics 11, 1-11.

A Bernstein type inequality and moderate deviations for weakly dependent sequences (with F. Merlevede and ) (2011) Probability Theory and Related fields 151 435-474.

On the normal approximation for random fields via martingale methods (with Na Zhang) Stochastic Process. Appl. 128, 1333-1346.

Magda Peligrad and Na Zhang (2017. )On the normal approximation for random fields via martingale methods. .1127 AMS meeting, Bloomington IN. Level:International

1995 Fellow of the Institute of Mathematical Statistics Demonstrated distinction in research in statistics or probability, by publication of independent work of merit.

Probability Theory and Stochastic Processes with a view towards applications in Statistics.