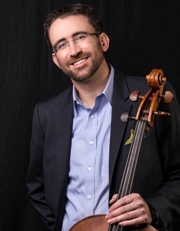 Alan Rafferty, University of Cincinnati, College-Conservatory of Music cello faculty member, is rapidly gaining recognition as a preeminent musician and master teacher.  In demand as a clinician around the world, Mr. Rafferty has presented Master Classes at numerous schools including the Cleveland Institute of Music, Northwestern University, the University of Michigan  and Depaul University and has been a visiting faculty member for the Cleveland Institute of Music, Malta Philharmonic Orchestra and makes yearly visits to work with the Fellows at the New World Symphony.
A member of the Cincinnati Symphony Orchestra since 2007, Mr. Rafferty holds the Ruth A. Rosevear cello chair.  In addition to playing over 1000 concerts as a member of the orchestra both in Cincinnati and around the world on tour, he has been a regular performer on the CSO Chamber Players Series and narrated Education Concerts.  In the spring of 2020, he will perform the Mendelssohn Octet with former Berlin Philharmonic Concertmaster Guy Braunstein, who is Artist-in-Residence for the CSO 2020-21 season.
Mr. Rafferty made his solo debut with orchestra at the age of 16 and has been a featured soloist on numerous occasions since.  Recent solo appearances have included the North American premiere of Victor Herbert's first published work, the Suite for Cello and Orchestra, Op. 3 and Don Quixote with the CCM Orchestra in January of 2017.  He can be heard on recordings for Telarc, Sono Luminus, CR and for WGUC Radio Station.
As a chamber musician, Mr. Rafferty regularly collaborates with the likes of Leon Fleisher, Matt Haimovitz, Sandra Rivers, the Ariel Quartet, and members of the Cavani Quartet.  In the summers, Mr. Rafferty is on the faculty of the Green Mountain Chamber Music Festival in Burlington, VT and the Aria International Summer Academy.  Previous summer festivals have included Meadowmount, Madeline Island and the Great Wall International Music Academy in Beijing.  Each January, he goes to Brazil as a faculty member of the Festival de Music de Santa Catarina.
His students have played as soloist with the Cincinnati Symphony, Louisville Orchestra and Dayton Philharmonic and have been 1st prize winners in the MTNA National Solo Competition, Louisville Orchestra Competition, Cleveland Cello Society and Tennessee Cello Workshop.  Former students have held positions in orchestras all over the world.  As Cello/Chamber Music Faculty for the Starling Program at CCM his groups have won the Junior Division Gold Medal and Silver Medal of the Fischoff Chamber Music Competition among others.
Mr. Rafferty holds degrees from the Cleveland Institute of Music and Northwestern University.  His primary studies were with Hans Jorgen Jensen, Alan Harris, Merry Peckham, and Richard Weiss.  He and his wife, cellist Dr. Sarah Kim, were recently named the 2016 Ohio String Teachers Association Studio Teachers of the Year.  They are the founders and directors of the nationally recognized Cincinnati Young Artists which present Chamber Music and Cello Workshops throughout the year- cincinnatiyoungartists.org