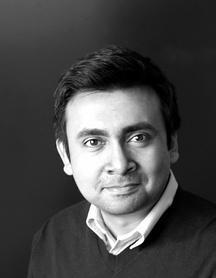 Muhammad Rahman, M.Des., B.Arch., is currently an Assistant Professor in the School of Design in the College of DAAP, University of Cincinnati. He holds a M.Des. in Graphic Design from University of Illinois at Chicago, UIC (2014) and B.Arch. from BRAC University, Bangladesh (2007). He worked as Branded Environments Designer-II at Perkins+Will Chicago before started pursuing his PhD in Architecture. He completed his 4-week 'typography and design' summer certificate courses at Basel School of Design (2013). He has held an appointment as a Lecturer-II at BRAC University. In conjunction with his practiceresearch he has taught students in communication design and architecture programs in USA, Portugal and Bangladesh for over nine years. Muhammad Rahman is an Assistant Editor of "Visible Language," the oldest peer–reviewed academic journal for design.

Owing to his background as a practitioner, Muhammad Rahman takes a strong interdisciplinary and practice-informed approach to teaching that gives him the ability to bridge between theory and practice of communication design. As a practicing architect, educator and photographer, Muhammad has an ability to integrate his background in architecture with graphic design as an intuitive fusion. His works consist of various interior and space design projects, promotion materials, brand designs, experimental typography, book and poster design etc. Muhammad has developed his own passion and character in spatial photography, visual abstraction - his works placed in different exhibitions and got awards.